Scottish income tax rates and thresholds for 2021/22: what they mean for taxpayers resident in Scotland

The Scottish government has confirmed the rates and thresholds for Scottish income tax that will apply to the non-savings and non-dividend (NSND) income of Scottish taxpayers from 6 April 2021.  For the purposes of this article, references to the UK includes England and Northern Ireland excluding Wales which has its own tax rates.

When is an individual a Scottish taxpayer?

Typically, an individual will be considered as a Scottish tax resident if they live in Scotland for the whole tax year but the position can become more nuanced if an individual moves to Scotland part way through a tax year, has more than one home within the UK at the same time or they have not established a fixed place of residence within the UK.

What type of income is NSND?

NSND income includes profits from self-employment and rental properties, employment income and pension income.  For savings interest and dividend income, if you are a Scottish tax payer, you will continue to pay income tax according to the UK rates and bands of income tax.

For the 2021 -22 tax year the five-band structure for Scottish income tax continues to be in place, whereby the basic rate band has effectively been split into three – the starter, basic and intermediate rate bands. The higher rate and additional rate bands continue to be one percent higher than the UK equivalents at 41% and 46%, respectively.

The rates and bands for Scottish income tax from 6 April 2021 are set out below:

What does this mean for individuals living in Scotland compared to the rest of the UK?

The difference can best be illustrated by using the following example: if a taxpayer has employment income of £45,000, savings income of £1,500 and dividend income of £3,500 during the 2021 – 22 tax year, a Scottish income taxpayer will pay c.£444 more income tax than an individual in the rest of the UK as follows: 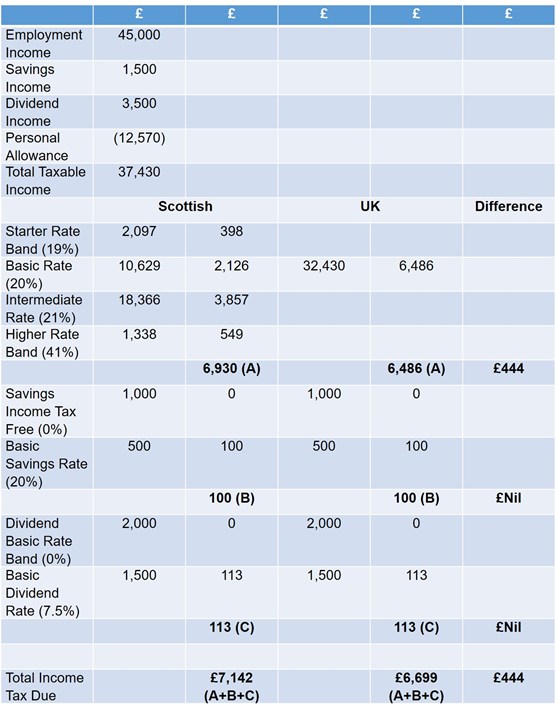 What can be done to reduce the impact?

This will depend upon the source of income that an individual receives. For the typical business owner operating through a limited company, it highlights the importance of having the right remuneration strategy in place and maximising income tax reliefs (where these are available). It will also be important to optimise pension contributions (where possible).

For business owners operating as sole traders and/or as partnerships, it may strengthen the case for incorporation but, potential income tax savings should not be the only driver when making this decision as it should be the right commercial outcome for all involved.

This blog was co-written by Michael Jamieson and Personal Tax Assistant, Charlotte Pleass.