Please note - the below was written on 27th October, before the furlough (Job Retention) scheme was extended.  The Job Support Scheme is now on-hold, but you may wish to read this more recent article on the November furlough extension.

They say as one door closes, another door opens – in the case of the furlough scheme, with the Coronavirus Job Retention Scheme (CJRS) ending on 31 October 2020, the Government has announced further changes to the Job Support Scheme (JSS) coming into place on 1 November 2020.  But instead of one door, there will be two and one will be ‘Open’ and the other very much ‘Closed’!  [We know, it's confusing, but keep with us and we'll try to explain a little more below...]

The development of the Job Support Scheme.

It is fair to say that getting to the current position with the Job Support Scheme has been a rather bumpy ride leaving the public, businesses, employees and advisers scratching their heads – below is a whistle stop tour of how we got where we are in the last month:

Right, so where are we now? 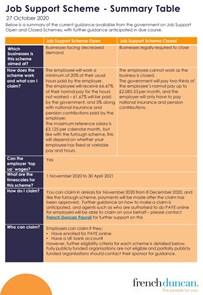 One month later following a fair bit of to-ing and fro-ing, third time lucky, we have a Job Support Scheme which is far more generous than we could have anticipated.  There is a palpable recognition that the support provided by the government since March through the Coronavirus Job Retention Scheme could not continue, but the new scheme will certainly stem the flow of job losses over the next six months.

The theory of the Job Support Scheme is relatively simple:

However, just like the furlough scheme, in practice there are several layers of complexity which employers need to navigate through to determine if they are eligible to participate and what and how to make a claim when furlough comes to an end.

The government guidance is available online, but amounts to over 6,000 words of guidance and rules for employers to decipher and understand.  We have therefore distilled this down into a table which you can download by clicking here.

Finally, like the original furlough scheme, this will be a UK-wide scheme administered by the HMRC.  However, it remains to be seen whether the Scottish Government’s newly announced '5 tier system' may add an extra layer of complexity to the operation of the scheme and we will keep you updated on developments with this.

Other types of support.

You'll be aware that JSS is only one type of support; there are other schemes available so please read through our other blogs and online content to find out more. Of specific interest may be this piece on the Scottish Government's Strategic Framework (i.e. 5 Tier) support - click here to have a read.

If you would like further support on either the Job Support Scheme or other employment related matters, please do get in touch at enquiries@fdhrservices.co.uk and we will be delighted to help.